Search
Home
Blogs
LASER RUST REMOVER
Rust is a result of reaction between iron and water on metal surface causing corrosion of iron or any other metallic materials. Rust is a process of oxidation which reacts with water or air moisture causing the damage to metal with time. This process reduces the life of metal and results into disintegration of metal.
Traditional method of rust removal were, keeping it with chemicals which later had to properly neutralized and disposed, it results into unpleasant odour.
So to increase the life of metal material and reduce the waste to the environment there is a product called laser rust remover. Unlike all traditional methods, laser rust removal is handy and works on the principle of sublimation. Sublimation is a process in which solid turns into gas without passing into the liquid state. It works on short pulses of laser light which have to be aimed at metal surface of rust. When the laser is aimed on the rust, it produces micro-plasma burst, along with thermal pressure and shock wave to sublimate and evaporate the rust from the metal surface without causing any damage to the original metal. In other words, the laser energy is used to heat the metal surface which melts and vaporizes the oxides present on the metal. A 1000 Watts handheld laser removal is designed which removes rust, paint and any other coating from the metal surface. It doesn’t cause any harm to human if there is direct contact between the laser and human skin (not applicable for babies). This product can be widely used to remove rust from small amount of area instead of replacing the complete structure. Since it is costly, it is only used for industrial applications. 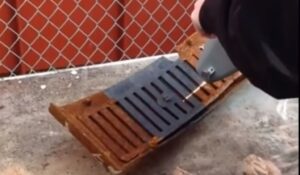 Some of the advantages of Laser Rust Remover are:
Ø Non- abrasive (Base material is not damaged).
Ø No contact is required.
Ø No residue is left after the process.
Ø Lower sensitivity to corrosion after cleaning.
Ø No chemical waste.
Ø Powered by electricity.
Ø Can be used in construction, garage, industries, etc.
Pic Courtesy: https://www.carthrottle.com/post/does-laser-rust-removal-work-and-is-it-affordable/
Editor: Miinaz Vadaliwala